Home > Our Company > Testimonials > How First-Omeprazole helps my child 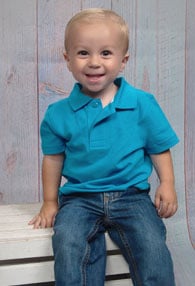 FIRST-Omeprazole has changed my son’s life dramatically! My son was placed on FIRST-Omeprazole at the age of 15 months old and he still is on it at 3 years old today. Before my son was placed on FIRST-Omeprazole he had a chronic cough that was horrible and not controlled. He was not gaining a lot of weight and his appetite was not big. He was fussy and we could not figure out why nor could the doctors. At 15 months old the doctors had placed him on the medication and it had helped him right away. He began to eat more and his cough subsided and was all around happier. We tested the medication several times and took away the medication and after 2 days being off all his symptoms came back and was back to being miserable!

FIRST-Omeprazole is the only acid reflux medication that he could tolerate. He takes it very easy every day as he has it twice a day and it is not a fight. He loves the taste and we love that it helps him. We have tried other medications that are for acid reflux and he has thrown them up and cannot tolerate the taste as a lot of the acid reflux medications have horrible taste and texture for a child to take. I did my research and contacted the manufacturer, Cutis Pharma, because this medication so dramatically changed his life that he needed it on a daily basis and they are so helpful in helping me get this medication for my son. I was so happy and relieved that they had told me this is available for my son to get as it has helped his life so much. He is all around so much happier while he is on it, his cough is subsided and his appetite is increased.