WILMINGTON, Mass. (November 15, 2016) – CutisPharma today announced the opening of a Research and Development center to house the company’s expanding R&D team. The new center will provide office and laboratory space to facilitate the company’s aggressive plans for developing products for FDA approval under its wholly owned subsidiary, RM Therapeutics. 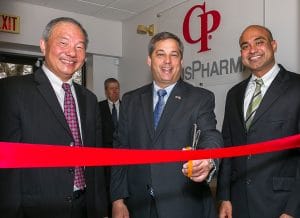 “We are in the midst of a significant expansion of our research and development capabilities,” said Steven Dinh, Sc.D, Executive Vice President and Chief Scientific Officer of CutisPharma. “Our new state-of-the-art R&D center provides us sufficient space to accommodate our growing team as well as significantly enhanced capacity to do in-house research with our additional laboratory.”

CutisPharma celebrated the opening of the R&D facility today during a special ceremony featuring Massachusetts Senator Bruce Tarr and other state and local officials. The new space is located in Woburn, less than mile from the company’s headquarters in Wilmington. 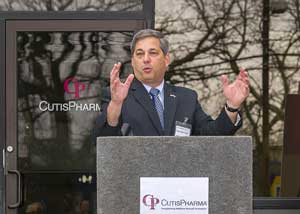 “Our state has quickly and definitively become the epicenter for life sciences because of substantial capital investments in research and development,” said Tarr, the Senate Minority Leader. “I applaud CutisPharma’s initiatives to expand here because they directly impact gains in local employment, enhancements of the region’s economy and ultimately the development of pharmaceuticals that can promote health.”

CutisPharma has recently undertaken several significant initiatives to transition the business from its historical base in the pharmacy compounding market and toward development and commercialization of FDA-approved drugs.

In March of this year, CutisPharma announced the opening of a manufacturing center at its Wilmington facility and the completion of supporting activities to prepare the first NDA filing of the company’s lead pipeline drug, RM-01, next year. In April, the company announced the initiation of a partnership with Dr. Reddy’s Laboratories, which will allow for the acceleration of three additional drugs, RM-02, RM-03 and RM-06, toward FDA approval.

The creation of a dedicated R&D center will provide new office and laboratory capacity to house the expanding team of CutisPharma’s RM Therapeutics subsidiary and will further enhance the company’s ability to bring its promising new drugs to the marketplace in an efficient and timely manner.

CutisPharma, Inc., based in Wilmington, Mass., is a privately held, specialty pharmaceutical company that has historically developed and distributed kits used by pharmacists to safely create compounded medications for nearly 20 years. The Company’s products include oral solutions and suspensions, such as antimicrobials, mouthwashes, and PPIs; topicals, including hydrocortisone and testosterone; and suppositories, including progesterone VGS. The Company’s FIRST Unit-of-Use Kits have benefited millions of patients who are unable to swallow conventional oral dosage forms such as tablets and capsules and whose needs were not served by commercially available therapies.

RM Therapeutics, a wholly owned subsidiary of CutisPharma, is focused on developing and commercializing FDA-approved drugs to meet the needs of patients, such as children and the elderly, who are unable to take tablets and capsules and need a high quality, palatable alternative formulation of their therapy to address their needs.